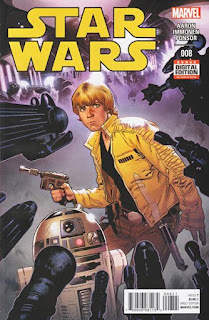 [A version of this review first appeared on Patreon. And visit the "Star Wars Central" review page.]

Book II, Part I: “Showdown on the Smugglers' Moon”

I have already reviewed two issues of Marvel Comics' revival of its Star Wars comic book series, which began earlier this year and now includes two other ongoing series and two miniseries (thus far).  I reviewed Star Wars issues #1 and #7.  I did not expect to review another issue of Star Wars for at least half a year.

However, Star Wars #8 (“Showdown on the Smugglers' Moon”) introduces the new art team of penciler Stuart Immonen and inker Wade von Grawbadger.  As a team, they are known for their work on writer Brian Bendis' All-New X-Men and on All-New Captain America, in which Sam Wilson/The Falcon becomes the new Captain America.

When last we left our heroes (Star Wars #6), Princess Leia and Han Solo were traveling together, searching the galaxy for a suitable site for a new base for the Rebel Alliance.  They ran afoul of Imperial patrol ships and ended up landing on a remote planet in an uncharted region of the Outer Rim.  There, they have an even more shocking encounter when they meet a woman named Sana Solo, who claims to be Han's wife.  Sana is thinking about killing Han and selling out Leia, but the Imperials have plans of their own to pursue their quarry rebels.

Meanwhile, Luke Skywalker has just left his home world of Tatooine, where he discovered the secret journal left for him by Jedi Master Obi-Wan Kenobi a.k.a. “Old Ben Kenobi.”  However, Luke believes that he needs more information than what he has thus far found in the journal, if he is going to become a true Jedi.  So he decides to travel to the former home of the Jedi, but first he makes a stop on Nar Shaddaa, “The Smuggler's Moon.”

I must be honest and admit that I was shocked by the art that Stuart Immonen and Wade von Grawbadger delivered for their debut issue.  Combined with Justin Ponsor's gorgeous coloring, this team has delivered stellar work that blends the best of Adam Hughes, Bryan Hitch, and Kevin Nowlan.  Both in terms of graphical storytelling and style, Stuart and Wade create a kind of Star Wars comic book art that is classic Star Wars.  In addition, their Star Wars also recalls the vivid colors and snappy adventure storytelling of Marvel's 2014 Guardians of the Galaxy film.

Once again, the creators of a Marvel Star Wars comic book title have me chomping at the bit to read the next issue.  In the case of Star Wars, I am not ashamed to be a fanboy.

Posted by Leroy Douresseaux at 5:19 AM