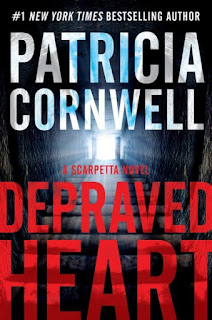 Depraved Heart is a 2015 crime novel from best-selling author Patricia Cornwell.  It is the 23rd novel in Cornwell's “Kay Scarpetta” series, which began with the 1990 novel, Postmortem.  Depraved Heart finds Scarpetta besieged by a spooky blast from the past when mysterious, decades-old videos appear on her phone while she is right in the middle of a suspicious death scene.

As Depraved Heart begins, medical examiner Dr. Kay Scarpetta is in the home of Chanel Gilbert, the grown daughter of Hollywood heavy-hitter producer, Amanda Gilbert.  Chanel is dead, in what seems to be an accidental fall.  Apparently, she fell while trying to change a light bulb in her historic house, located near the Harvard campus in Cambridge, Massachusetts.

Then, it happens.  An emergency alert sounds on Scarpetta's phone.  It heralds the arrival of a video link that lands in her text messages and seems to originate from her niece, Lucy Farinelli, a computer genius.  What instantly troubles Scarpetta is that this video link opens to a surveillance film of Lucy in her room at the FBI Academy, Washington Dormitory, Room 411, but that was almost 20 years ago!

The video not only troubles Scarpetta, but also supports her suspicions that the murder scene at the Gilbert house is suspicious.  There are more videos to come, each one making her frightened for Lucy, the niece she loves and raised as if she were her own daughter.  Are these videos connected to Chanel Gilbert's murder?  Does Lucy have a connection to Chanel?  What Scarpetta is sure of is that an old enemy is back in full force, and the machinations of this brilliant monster will make Scarpetta suspicious of everyone and everything around her.

After reading Flesh and Blood last year, I eagerly awaited the next Kay Scarpetta novel.  If Patricia Cornwell had decided to take a break from Scarpetta and produce some other book for publication this year, I would have had to turn to crack for comfort.  So I was happy when HarperCollins public relations offered reviewers a galley edition of Depraved Heart.

Where as Flesh and Blood's story traveled across the Eastern seaboard and into the Bermuda Triangle, Depraved Heart is set mainly in Chanel Gilbert's house.  And it is an old house, jealously guarding secrets and fostering lies.  No matter where Scarpetta wants to go, this haunted house calls her back.

On Cornwell's part, this is an impressive feat of writing, even for someone who has been writing novels for the better part of three decades.  It is not such much that the plot and storytelling of Depraved Heart are restrained; rather, it is that Cornwell must restrain her lead character, Scarpetta.  A woman of intelligence and discipline, Scarpetta finds her life, her loved ones, her friends, her colleagues, and her work endangered in such a way that she wants to drop the facade of reason and let the animal loose.

Not that it matters either way.  Scarpetta cannot trust her memories and her emotions are suspect.  Also, for her all skills and intellect, Scarpetta does not figure things out so much as she merely stumbles about – making discoveries as if she were a janitor finding a penny in the corner.  That is what is so troubling and simultaneously thrilling, you don't when or if the death blow is coming, and neither does our forensic god, Scarpetta.

If you wonder why book series seem to become a little less interesting with each book, it is because a series will naturally play up the “same old things.”  Usually, for things to change, the original author has to die, and the estate has to be smart enough to find a new writer or new writers that can pump life back into a series.  Patricia Cornwell proves that the Kay Scarpetta series won't need Kay Scarpetta's talents anytime soon, not when the latest book can keep even depraved hearts pounding to the very last “little bit.”


Posted by Leroy Douresseaux at 4:43 AM