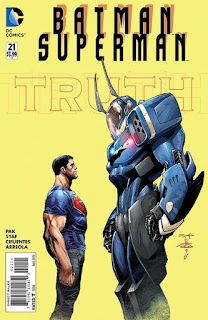 Superman and Batman have been teaming up in various comic books for decades.  The best known Superman/Batman team-up series was the long-running World's Finest Comics (1941 to 1986).  The current incarnation of a Dark Knight/Man of Steel team-up comic book is Batman/Superman, which is currently written by Greg Pak; penciled Ardian Syaf, inked by Vicente Cifuentes; colored by Ulises Arreola; and lettered by Rob Leigh.

Batman/Superman #21 (Truth Hurts” Part One) is essentially the first DCYou issue of the series.  As the story begins, Superman is fighting for his life, when he shouldn't.  You see, Superman has lost his powers (as seen in Gene Luen Yang and John Romita, Jr.'s run on Superman, beginning with issue #41), and the world knows that he is also Clark Kent.  A visit to Lex Luthor pays off in information.  The source of the thugs that are plaguing Superman seems to be located in Gotham City.  But Superman does not know about the current Batman...

I would normally not spend a dime on Batman/Superman.  If I want to read about Batman and Superman partnering up, I will read a Justice League comic book or find a back issue of World's Finest.  However, I decided “what the heck?” because I want to read as many DCYou first issues and first chapters as I can.

This actually is not bad.  Ardian Syaf's art, which is awkward like a teen boy struggling through puberty, and Greg Pak's functional storytelling capture the struggles of this “new era” in both Superman and Batman titles.  This comic book is worth reading just to see how the new status quo works out for DC Comics' “Big Two” characters as a unit, at least for the time being.  In fact, I'm curious enough to read a few more issues of (DCYou) Batman/Superman.

Posted by Leroy Douresseaux at 4:27 AM