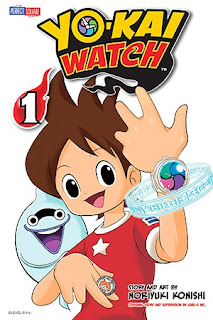 Yo-Kai Watch is a video game created by Japanese video game developer, Level-5.  It is published by Nintendo for the Nintendo 3DS.  Yo-Kai Watch inspired a manga produced by mangaka, Noriyuki Konishi.  This manga is the latest addition to VIZ Media's “Perfect Square” imprint, and November sees the release of the first two volumes of Yo-Kai Watch.

Yo-Kai Watch, Vol. 1 (entitled Nate's Lucky Day; Chapters 1 to 7) introduces Nate Adams, an ordinary elementary school student.  One day, Nate meets a strange yokai (called “yo-kai” in this series) named “Whisper.”  The floating, blob-like Whisper gives to Nate a gift.  It is the “Yo-Kai Watch,” which allows Nate to see yo-kai that are invisible to the human eye.  Soon, Nate is helping yo-kai and collecting from each one a “Yo-Kai Metal,” a memento of friendship that allows him to call on each one when he needs help.

[This volume includes the bonus story, “Late to School!!]

The Yo-Kai Watch manga is a good graphic novel series for young comics readers, especially those already familiar with Yu-Gi-Oh! manga.  In fact, I would not be surprised to learn that Yo-Kai Watch is inspired by Yu-Gi-Oh!  Both franchises encourage fans to collect franchise-related creatures and creature-inspired objects and ephemera.

That aside, Yo-Kai Watch Volume 1 is a good read.  The stories are not exactly taken from the “wheel of morality,” but each offers a lesson to learn.  Also, Nate Adams is an all-around good guy, who is always up for adventure and discovery, which is a good thing in a lead character, whether the story is for young or old.

Posted by Leroy Douresseaux at 4:30 AM