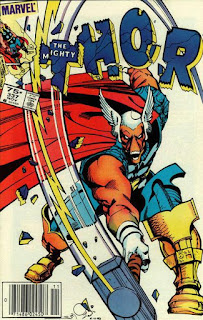 Thor, the Marvel Comics character, is based on the Norse mythological deity of the same name.  Marvel's the mighty Thor is the Asgardian god of thunder; possesses the enchanted hammer, Mjolnir; and is also a superhero, as well as being a member of The Avengers.

Thor first appeared in Journey into Mystery #83 (cover dated August 1962) and was created by editor-plotter Stan Lee, scripter Larry Lieber, and penciller Jack Kirby.  For most of his 53 years of existence, Thor has possessed Mjolnir, which, among other superhuman attributes, grants him the ability of flight and of weather manipulation.

Thor has possessed that “enchanted hammer” for most of his comic book existence, but there have been times when Thor:  the Prince of Asgard, the one true God of Thunder, and the Odinson, has not possessed Mjolnir.  In fact, the current wielder of Mjolnir is a woman, Jane Foster, which means that she is now Thor.

Before this female Thor, the most famous example of someone wielding Mjolnir occurred in a story that started in Thor #337 (cover dated: November 1983).  This was the first chapter of the saga of Beta Ray Bill, and the first issue of comics creator Walter Simonson's acclaimed run as writer-artist of Thor, which was also known as The Mighty Thor.

Early in The Mighty Thor #337, Dr. Donald Blake, Thor's human guise, receives a surprise visit from Colonel Nick Fury, boss man of S.H.I.E.L.D.  Blake taps his cane, transforming into Thor, as he is whisked to the SHIELD Helicarrier.  Thor learns that a strange alien ship, with immensely destructive capabilities, is headed toward Earth.  Thor travels through space and forces his way into the ship, but he discovers that the ship can defend itself and it has Beta Ray Bill!

Although I owned several issues (and even a trade paperback) of Walter Simonson's run on Thor, I never owned issue #337.  Recently a friend of friend gave me a copy because he said that he had a duplicate.  Of course, I was grateful.

I think I did read #337 in trade paperback form, but I don't really remember it.  I don't know why there is a memory lapse, as #337 is an especially memorable issue of Thor.  Visually and graphically, Simonson recalls Jack Kirby's Thor comic books, but in his own inimitable style.  In a way, Simonson is a fantasy artist who can take weird and ludicrous people, beings, creatures, and environments and transform them into awe-inspiring art that seems plausible... even if they are only plausible in some fantastic world.

I think that this is what Simonson did.  He returned Thor to the fantastic world of Jack Kirby and expanded upon it.  The epic lettering of the great John Workman practically makes this comic book ring with thunder, especially when Workman adds sound effects.  Some of George Roussos' coloring hides the power of Simonson's compositions, but there are moments when the coloring perfectly gives a sense of the fire in Simonson's graphical storytelling.  After reading Thor #337, I am ready to find more duplicate issues...

Posted by Leroy Douresseaux at 10:00 AM