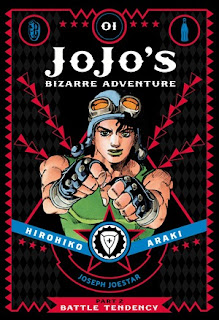 JoJo's Bizarre Adventure begins with the “Phantom Blood” arc.  Now, the series moves on to the “ Battle Tendency” story arc.

That is just the first of many fights in which JoJo will find himself.  Somewhere in Central America, JoJo's “uncle,” Robert E.O. Speedwagon, has found Nazis and something called the “Pillar Man.”  Called Santviento, this Pillar Man's revival could mean extinction's arrival for mankind.

The JoJo's Bizarre Adventure manga was first published in 1986 in Weekly Shonen Jump.  This manga has quite a reputation, because even I had heard of it, and I have only been a regular reader of manga this past decade.

After reading the “Phantom Blood” arc, I did not know what to expect of the series as it moved forward.  Would I even care, I asked myself.  JoJo's Bizarre Adventure: Part 2 – Battle Tendency, Volume 1 answers that with a resounding “Yes!”  I like Joseph Joestar.  Like his grandfather, Joseph Joestar is a hero, but whereas Jonathan was brave and resolute, Joseph is daring and rowdy.  He is certainly willing to be a hero, but he also likes experiencing the physical sensations of adventure and battle.  So the series is in good hands, and I look forward to more.


Posted by Leroy Douresseaux at 4:55 AM