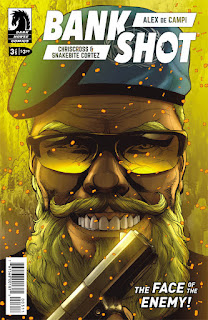 Bankshot is a five-issue comic book miniseries from writer Alex de Campi and artist ChrisCross.  Snakebite Cortez is the series colorist and de Campi is the letterer.  Published by Dark Horse Comics, the series focuses on an anti-hero Marcus King, part modern-day Robin Hood, part terrorist, part tech-enhanced super-human or both – on a mission of revenge.

Bankshot #3 takes place in two time periods.  First, the story returns to Tunisia, a decade earlier, where King recuperates in an unnamed hospital.  The revolutionary nanonite procedure that will help him walk again is already showing changes in King – in ways that are almost supernatural.  Jump forward to the present, King is in the Ukraine, tearing through the base of operations of The Dutchman, the man who left King for dead in North Africa, but just when King seems to have snatched victory...  Meanwhile, the CIA makes its boldest move yet against King.

I will keep saying it as long as they keep doing it.  Alex de Campi and ChrisCross are killing it with Bankshot... and then killing it again.  This is pure action-adventure like Jason Borne, James Bond, and Mission: Impossible movies with a dash of the novels of James Rollins.

Bankshot is a pop comic from the action, mercenary, noisy side of the pop comic house.  I like that Alex de Campi has focused on Marcus King's past from a decade earlier to establish him as a character,  but I have to admit that I have a blast when de Campi slams us with some fight comics.  She can get down in the dirt with male writers of action comic books; she is better than many male comic book writers who are allegedly top writers of violent action comic books.

ChrisCross' storytelling captures all the moods and the switches in pace and setting.  He visually and graphically creates a balance between the drama and suspense and the action and violence.  Boy, though, he can draw some wild and crazy fight scenes.  Hurry up, space-time; get us to #4

Amazon wants me to inform you that the link below is a PAID AD, but I technically only get paid (eventually) if you click on the ad below AND buy something(s).
Posted by Leroy Douresseaux at 8:57 AM