Review: CHILDREN OF THE WHALES Volume 1 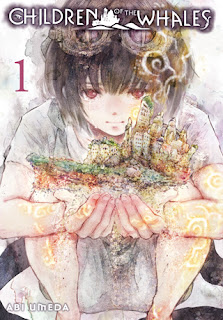 Children of the Whales is a new fantasy adventure manga series from creator Abi Umeda.  The series is set on a island floating atop an endless sea of sand, and the narrative focuses on the isolated community that clings to life on that island.

Children of the Whales, Vol. 1 (Chapters 1 to 4) introduces a boy named Chakuro.  He is the archivist for the “Mud Whale,” a floating island city of clay and magic.  Chakuro diligently chronicles the lives and deaths of his people, who cling to survival, but are cut off from its own history.

As the story begins, the community holds a funeral for Benihi, one of “the marked.”  Chakuro is also one of the marked; they are short-lived, but they wield “Thymia,” a magical power fueled by emotions.  Knowing that his time is short, Chakuro tries to chronicle everything he can about his isolated community.  That isolation, however, is about to be shattered by the discovery of a mysterious girl on another mysterious floating island.

[This volume includes an afterword, “How I Discovered Children of the Whales.”  This is also “From the Archivist's Diary: An Illustration of the Mud Whale,” and “A Note on Names.”]

I can honestly say that Children of the Whales is one of the best new manga and graphic novel debuts of 2017.  It reminds me of Daisuke Igarashi's imaginative environmental manga, Children of the Sea, which VIZ Media published earlier this decade.

Children of the Whales Volume 1 reads like an eco-fantasy and thriller because so much of the narrative is not only about the characters, but also about the world around them.  Creator Abi Umeda offers graphical striking compositions and inventive page design and layout that drive the narrative to balance character drama with a sense of suspense and mystery.  The four chapters contained in this first graphic novel are obviously connected, but each one presents something new, and sometimes even a fresh perspective.  From the exotic beginning to the shocking ending, Children of the Whales, Vol. 1 is a magical and gripping narrative.

Readers looking for unique graphic novels for young readers and teens will want the VIZ Signature title, Children of the Whales.

Posted by Leroy Douresseaux at 4:25 PM