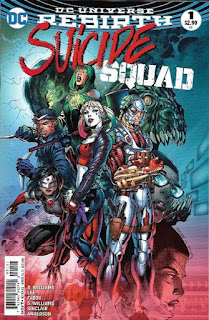 “The Black Vault” Part One: “I Wanna Be Sedated”

Suicide Squad is a DC Comics team.  It first debuted in The Brave and the Bold #25 (cover dated: August/September 1959) and was created by writer Robert Kanigher and artist Ross Andru.

With the re-launch of DC Comics’ superhero line, “The New 52,” there was a new Suicide Squad comic book series.  The Suicide Squad was a team of super-villains, in which the members took on risky missions in exchange for time served. The team’s base of operations was Belle Reve Penitentiary, a special prison for meta-humans and super-villains located in Terrebonne Parish, Louisiana.

With the “Rebirth” event, there is a new Suicide Squad comic book.  It is written by Rob Williams; drawn by Jim Lee (pencils) and Scott Williams (inks); colored by Alex Sinclair; and lettered by Nate Piekos.

Suicide Squad #1 (“I Wanna Be Sedated”) finds Amanda Waller, the head of Task Force X, making a trip to Belle Reve Penitentiary where she meets with Colonel Rick Flag, Suicide Squad Field Commander, and his second-in-command, Katana.  Together, they will select a squad of super-villain scum for a mission to retrieve or destroy an alien item that a rogue Russian state is studying.  However, this Suicide Squad:  Deadshot, Harley Quinn, Captain Boomerang; The Enchantress, and Killer Croc may not be badass enough to compete this mission.

The main story is 13 pages long and is not long enough for me to get much of a feel for the quality of the beginning of the story arc.  I can say two things.  First, I don't feel I need to read more. Second, Jim Lee is on the down side of his career.  Compared to even his average work, this is poor.

“Never Miss” is kind of an origin story slash biography slash early tale of the career of Deadshot.  I liked it.  It's dark and depicts Floyd Lawton a.k.a. Deadshot as a man who is much more complicated and conflicted than his costumed self suggests.  Writer Rob Williams smartly depicts the high costs of being Deadshot, and Jason Fabok's dark compositions makes this tale's tragic angle feel genuine.


The text is copyright © 2016 Leroy Douresseaux. All Rights Reserved. Contact this blog or site for syndication rights and fees.

Posted by Leroy Douresseaux at 4:47 PM