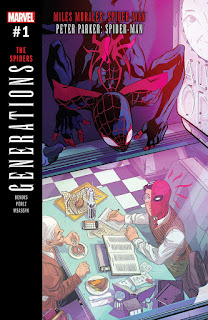 Generations is an event limited comic book series from Marvel Comics.  It is a planned 10-issue anthology comic, published weekly.  Each issue is written and drawn by a different creative team, and each issue will feature a different team-up of a classic Marvel superhero with his or her modern-day counterpart.  The series is meant to unite the legacy of classic Marvel Comics characters with the next generation of heroes as both move into the future of Marvel Comics storytelling.

The ninth issue (at least by my count) is Generations: Miles Morales Spider-Man & Peter Parker Spider-Man, which brings together two versions of the classic Marvel Comics character, Spider-Man.  The first is the original Spider-Man, Peter Parker, the Amazing Spider-Man, who first appeared in Amazing Fantasy #15 (cover date: August 1962).  The second was once known as the Ultimate Spider-Man; he is Miles Morales who first appeared in Ultimate Fallout #4 (cover dated: August 2011), and who now lives in the Marvel Universe as simply Spider-Man.  This issue of Generations is written by Brian Michael Bendis; drawn by Ramón Pérez; colored by Msassyk; and lettered by Cory Petit.

This version of Peter Parker does not know Miles Morales, and Parker is about to face one of the most difficult battles of his life, as his precious Aunt May lies near death.  So Miles asks himself, “Why am I here, now, to witness this time in Peter's life.”

Of late, artist Ramón Pérez is the go-to-guy when Marvel wants to replicate and recall the early Steve Ditko Spider-Man comic books.  Pérez offers his most impressionistic take on Ditko's Spider-Man yet.  I think that this is appropriate as Generations: Miles Morales Spider-Man & Peter Parker Spider-Man #1 is supposed to have a dream-like quality, making it less about plot and setting and more about what is discovered in the story.

Bendis makes this tale Miles' story and the point is that Miles is supposed to learn something from Peter Parker.  What he learns is surprising, and I have to give Bendis credit because initially I did not see a reason for this story; Miles and Peter have team-up quite a bit in the recent past.  So Generations: Miles Morales Spider-Man & Peter Parker Spider-Man #1 is redundant... except, don't call this a team-up.  True insight can be gained!  I won't call this one of the better Generations entries, but it is a novel approach to bringing familiar characters together.


Posted by Leroy Douresseaux at 5:31 PM