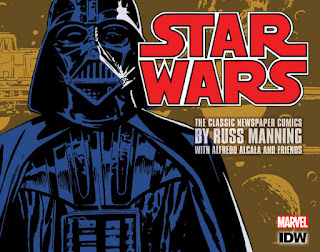 A long time ago in a galaxy far, far away... there was a Star Wars newspaper comic strip, which included a daily strip in black and white and a full-color Sunday episode.  From 1979 to 1984, a group of dedicated writers and artists “brought us all the action of the movie [Star Wars] in a daily adventure comic strip!”

Now for the first time, courtesy of IDW Publishing and its imprint, The Library of American Comics, the classic Star Wars newspaper strip is being reprinted in its entirety and in its complete format.  That includes each Sunday title header and the “bonus” panels in their restored original color.  Star Wars The Classic Newspaper Comics, Volume 1 was published in May and contains 575 sequential comic strips from the Star Wars comic strip’s premiere on March 11, 1979 to October 5, 1980.

This collection covers ten story arcs, beginning with the first three, which were written and drawn by the legendary newspaper comics and comic book artist, Russ Manning.  The next six story lines were drawn by Manning with the help of several artists, among them Rick Hoberg and Dave Stevens, and written by Russ Helm, Don Christensen, and Steve Gerber.  This book's final story arc is drawn entirely by legendary Filipino comic book artist, Alfredo Alcala, and written by Helm.

The Star Wars newspaper strip features the classic characters from the classic original film, Star Wars (1977).  Luke, Leia, Han Solo, Chewbacca, C-3PO, R2-D2, and, of course, Darth Vader, spar for the fate of the galaxy.  In “Gambler's World,” Luke and Leia travel to Vorzyd 5, a world that is one planet-wide casino, and our heroes must shut down this gambling operation that funds the Galactic Empire's military efforts.  Han Solo and Chewbacca race “The Second Kessel Run” to stop a ship that can use a planet's weather and climate to destroy that world.  In “Bring Me the Children,” the entire Star Wars gang leads a ragtag band of pilots, who are also friends of Han Solo, to save a group of children from the murderous clutches of the Empire.

I think what makes that possible is that the beginning of the Star Wars newspaper comics was guided by Russ Manning.  Manning's career as an illustrator and as a comic book artist began with his childhood love of pulp magazines and of science fiction in the 1930s and 40s.  As a young professional artist, he worked on the kind of material that entertained and influenced a young George Lucas, the creator of Star Wars.  In fact, Manning's best known work, the comic book, Magnus, Robot Righter, which he created, made him the ideal choice to be the writer-artist to bring Star Wars to the newspaper comics pages.  Manning gives the early story arcs a tone and a spirit that recalls space opera and space jockey adventurers like Buck Rogers and Flash Gordon, as well as the B-movie serials of the 1930s and 40s and 1950s sci-fi films – all Star Wars influences or antecedents to one extent or another.

What really shows is Manning's great talent for character design and creature creation and for his ability to fabricate exotic locales and environments.  Characters like “Black Hole” (a Darth Vader agent, lackey, and spy) and the wookies of Chewbacca's home planet (to say nothing of the fauna and foliage) are inventive and striking.

I do not want to downplay the contributions of the other writers and artists who worked on the first two years of this newspaper comic, but Manning sets the tone.  Manning was captivated by the original Star Wars and described it as incredible to the Los Angeles Times.  His love and admiration shows in the narrative and in the graphically striking art Manning produced for the strip, and that carries on through the stories reprinted in Star Wars The Classic Newspaper Comics, Volume 1.

For Star Wars fans who read this in a newspaper back when it was originally published, these comics are probably as entertaining now as they were then.  For someone who is just reading them now, like me, well, these newspaper comics, feel, read, and look like old-timey, original Star Wars.  IDW and The Library of American Comics do it again!  No fan of Star Wars comic books can go without reading Star Wars The Classic Newspaper Comics, Volume 1.


The text is copyright © 2017 Leroy Douresseaux. All Rights Reserved. Contact this site or blog for syndication rights and fees.

Posted by Leroy Douresseaux at 4:40 PM