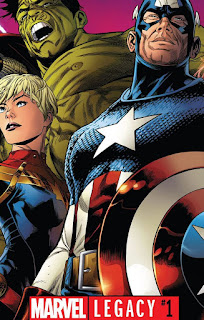 Marvel Legacy #1 is a new one-shot comic book from Marvel Comics.  I don't really know its purpose, other than what I read on the Internet.  After a year of reportedly falling sales of its comic books, Marvel does what it and DC Comics normally do:  initiate a reboot or a re-launch or hit-the-refresh/restart button, etc.  Such a rehash... I mean such a refresh is usually preceded by some kind of large scale publishing event, as it was here.  I guess that was the Secret Empire miniseries and the corresponding tie-ins and spin-offs.

SO I'LL SAVE YOU SOME TIME:  Marvel Legacy #1 has a few entertaining moments, with the best being the Wolverine reveal.  Some of it piqued my interest, but most it fell flat for me.  If you are looking for something exceptional, great, memorable, etc., Marvel Legacy #1 is not it, and it certainly is not worth the $5.99 cover price.  That said, you only need to keep reading this review if you usually enjoy my ramblings...

So here we go again; Marvel Legacy #1 launches the next big start-over.  I have read a lot of web commentary in which people compare this comic book to DC Comics' DC Universe Rebirth from last year.  I don't see the resemblance, and Rebirth has purpose and direction (at least to me), whereas Marvel Legacy #1 reads like a bunch of teasing and anticipation balled up together.

Marvel Legacy #1 has an omniscient narrator, Valeria Richards, the second child of Reed Richards and Sue Storm of the Fantastic Four.  She talks about legacies and begins her narration “One Million Years Ago.”  Something happened back then; that something plus some more bad stuff is coming back today.  Get ready.

Yep, that's it – something wicked this way comes, eventually.  The main story is written by Jason Aaron and drawn mainly by Esad Ribic, with some of it drawn by Steve McNiven.  Interspersed between segments of the main story are some one and two-page excerpts from upcoming Legacy launches – like Mark Waid and Chris Samnee's upcoming run on Captain America (Steve Rogers).

That's what this is all about, right?  A return to original i.e. traditional i.e. “white” characters.  Some believe that Marvel angered its aging white male fan base by recasting too many of its characters as black, Latino, Asian, female or some combination thereof.  Here's an anecdote for you.  For years, white male comic book readers told me that they did not want white comic books or black comic books, but they wanted good comic books.  Okay... Black male Spider-Man, Black female Iron Man, White female Hawkeye, Pan-Asian Muslim Ms. Marvel, White lady Thor are the leads of some very well written comic book series.  I know that because I read them.  But whiny White comic book retailers, clueless comic book corporate middle management, and fans who don't read books they complain about are driving this need for Marvel Comics to reset.

But the real villains here are Marvel Comics' shitty editorial decisions, arrogant management, piss-poor publishing plans, and virtually non-existent marketing.  Marvel Legacy #1 exists for the same reasons Marvel NOW, All-New Marvel NOW, and Marvel Now & Laters existed – all of the above and Marvel's addiction to the sales bump it gets from #1 issues.

Marvel Comics publishes too many comic books and has been doing so for 30 years.  Many of those comic books exist because Marvel will throw a lot of money at “star creators” to produce comics; or because someone will come up with some cute gimmick; or simply to grab more market share; or because a hit Marvel Studios movie will mean launching 10 new comic books directly, indirectly, vaguely, and/or even tangentially related to the movie.  Baby Groot the comic book series, y'all.

Too many titles frustrate readers for various readers, but especially because they cannot keep up with all those new comic books.  Marvel Legacy #1 is another pretend fix for symptoms that arise from Marvel's poor decision making.  That decision making needs a cure; the symptoms will go away after the cure.  For all Marvel's talk of a return to classic Marvel storytelling, next year it will do something like recast all its characters as Buddhists golden retrievers.

Marvel Comics' real legacy is that, no matter who owned Marvel, they never appreciated the artists and writers who really created the characters and stories that made Marvel a business and cultural force.  They held on tightly to Spider-Man, the X-Men, the Fantastic Four, Iron Man, and more while being dismissive of the talent, Jack Kirby and Steve Ditko, that drew those characters into existence.  Did it ever occur to those bosses how many more great characters and stories creators like Kirby and Ditko would have created for Marvel had the bosses acknowledged them financially and personally in a manner befitting people who multi-million dollar franchises?

So Marvel Legacy #1 epitomizes Marvel's real legacy – the short-sighted, self-serving choices instead of the long term choices that come with more risk and less immediate gratification.  Plus, Marvel Legacy #1 is just another comic book, fast food hamburger off the corporate conveyor belt – granted that there is some rather nice art inside.

Posted by Leroy Douresseaux at 4:11 PM