Review: BEHIND YOU: One-Shot Horror Stories 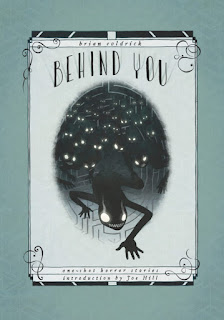 Behind You: One-Shot Horror Stories is a hardcover collection of cartoons or “comics with no panels” from Irish-born, U.K.-based cartoonist and designer, Brian Coldrick.  Published by IDW Publishing, this full-color, hardcover book arrives just in time for Halloween 2017.

Behind You is a cartoon or illustration series.  It is a single-illustration comic with no panels, and each episode is a separate story – each tale is one image and one piece of text – a one-shot horror story.  The subject of each comic is that of an unsuspecting person/victim with someone or something walking, creeping, hovering, or just around the corner behind them.  New and old episodes of the comic can be found at Coldrick's blog: http://thehairsonthebackofyourneck.tumblr.com/.  [You can financially support Coldrick's work as a patron at https://www.patreon.com/behindyou.]

Each page is simply a character with someone, or something, behind them and a line of text. While some of them touch on well worn horror tropes, none are direct adaptions of existing stories, I treat fairytales and myths, old and new, as fair game. Hopefully there is some amusing weirdness and genuine creepiness in the mix.

A small crowd or group of masked entities standing behind you.  A corpse reassembling as an unwary person assembles of puzzles.  Or a twisted figure crawls from the shadows.  Don't turn around.  This is the world Behind You.

The bestselling dark fantasy/horror author, Joe Hill, the pen name of Stephen King's son, Joseph Hillstrom King (cause it's good to be the king's son), writes an introduction for Behind You: One-Shot Horror Stories.  Hill describes Coldrick's cartoons as if they were masterpieces of terror or as if they were true horror comics.  I don't agree completely with that.

I think Brian Coldrick is in the tradition the late Edward Gorey and the late Charles Addams, especially the latter.  Like Addams, Coldrick's cartoons are macabre and darkly humorous, although Coldrick's comics may be a bit too much like fairy tales and fantasy comics to fit in with the cartoons at The New Yorker, where Charles Addams cartoons appeared.  Coldrick's comics are also similar, in some aspects, to the late newspaper single-panel comic, The Far Side, by Gary Larson.  The Far Side, however, is surreal and features anthropomorphic characters, whereas Behind You is related to fairy tales and myths, and plays with, as Coldrick says, “well worn horror tropes.”

I love Coldrick's comics, and Behind You: One-Shot Horror Stories is one of the best comics collections of the year.  Coldrick could rapidly become a modern master of the scary story; the writer and illustrator who reformatted spooky tales for the digital world of webcomics (although he says that he does consider his comics to be webcomics).  I agree with Joe Hill on one thing about Behind You; these comics are alive.

Posted by Leroy Douresseaux at 4:28 PM