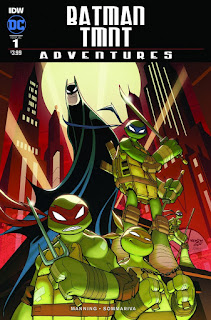 “The Face of Two Worlds”

Donatello, Leonardo, Michelangelo, and Raphael were adopted by an anthropomorphic rat, Master Splinter, who was their sensei and who trained them in the art of ninjutsu.  The Turtles live in the sewers of New York City and battle every bad guy from petty criminals and overlord-mastermind types to alien invaders and mutated creatures.

Batman/Teenage Mutant Ninja Turtles Adventures #1 (“The Face of Two Worlds”) opens in the Turtles' New York City, where we find them fighting crime in their own unique way.  Meanwhile, in Gotham City, Batman is trying to find out why select denizens of the infamous prison, Arkham Asylum, are disappearing and sometimes returning... and telling strange tales.

Batman/Teenage Mutant Ninja Turtles Adventures #1 takes its leads from those “Adventures” comic books.  Back in 1992, a syndicated animated television series named “Batman” debuted.  Commonly known as “Batman: The Animated Series,” it featured Batman in a visually striking manner that recalled the art and design of the 20th century's early decades and also the early years of Batman comic books.  DC Comics published a comic book based on “Batman: The Animated Series,” entitled “Batman Adventures,” which was also friendlier and more open to younger readers than regular Batman titles.  Since then, other comic books based on animated TV series have followed the lead of Batman Adventures, including IDW's (which has the license to publish TMNT comic books) Teenage Mutant Ninja Turtles Adventures.


Posted by Leroy Douresseaux at 4:47 PM