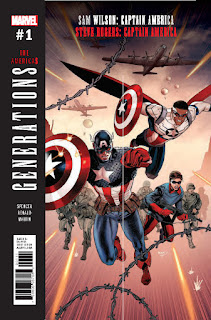 The Marvel Comics event comic book, Generations, comes to an end with a tale of two Captain Americas.  A 10-issue anthology miniseries, published weekly, each issue is written and drawn by a different creative team, and each issue features a different team-up of a classic Marvel superhero with his or her modern-day counterpart.  The series is meant to unite the legacy of classic Marvel Comics superheroes with a new generation of heroes, as both the original characters and the new ones move into the future of Marvel Comics storytelling.

Generations: Sam Wilson Captain America & Steve Rogers Captain America #1 (“The Americas”) opens with Sam Wilson-Captain America being questioned by government agents about why a particular group of ten superheroes disappeared (including Wilson) during the “Battle of Washington” (as seen in the Secret Empire event).  Wilson disappeared and reappeared in the 1940s as the United States of America gears up to enter World War II.

Unlike the other nine heroes, Wilson spends a lifetime in the world to which he is transported.  When Wilson enters the war as an enlisted man, a special enlisted man, the “Man in the Air,” he meets his friend Steve Rogers, a young man trying to find his way as Captain America, so the question is will Sam Wilson also find his own path?

While reading the first nine issues of Generations, I found several that I liked and two that I called the best of the lot.  But Generations: Sam Wilson Captain America & Steve Rogers Captain America #1 takes the prize.  I wish Marvel would consider turning this into its own series; it could at least make an excellent, thought-provoking, twelve-issue series.

In this final issue of Generations, Nick Spencer delivers a Generations manifesto, which is this.  It is okay to have personal heroes and roles models.  It is okay to be inspired by someone's achievements.  Once you begin to take your own path, however, it is your own path, not your inspiration's path.  You don't have to live up to the legacy of another; make a legacy of your own that is worth living up to.

Artist Paul Renaud's compositions and art for this tenth Generations is both subtle and evocative.  He conveys a story that takes a trip down memory lane, but nevertheless reaches towards the future and its infinite possibilities.  Laura Martin's colors quietly amplifies the moods and emotions and summons the sense of each time period in which Sam Wilson travels.

Generations: Sam Wilson Captain America & Steve Rogers Captain America #1 brings Generations to a close on a high note that the earlier issues did not necessarily suggest.  As event miniseries go, this is one of those single issues that are worth remembering even when the overall event miniseries is only remembered for its central plot or concept.

Posted by Leroy Douresseaux at 4:23 PM