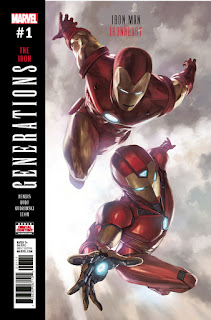 Generations is an event miniseries from Marvel Comics.  It is a planned 10-issue anthology, published weekly.  Each issue is written and drawn by a different creative team, and each issue will feature a different team-up of a classic Marvel superhero with his or her modern-day counterpart.  The series is meant to unite the legacy of classic Marvel Comics characters with the next generation of heroes as both move into the future of Marvel Comics storytelling.

The sixth issue is Generations: Iron Man & Ironheart, which brings together two versions of a classic Marvel Comics character, Iron Man.  The first is the classic Iron Man, also known as Tony Stark, who first appeared in Tales of Suspense #39 (cover date: March 1963).  The second is Ironheart, who is Riri Williams, a teen prodigy and genius engineer.  This issue of Generations is written by Brian Michael Bendis; drawn by Marco Rudy, Szymon Kudranski, and Nico Leon (pencils) and Syzmon Kudranski, Will Sliney, Scott Koblish, and Nico Leon; colored by Marco Rudy, Dean White, and Paul Mounts; and lettered by Clayton Cowles.

It took me six issues of Generations, so it is Generations: Iron Man & Ironheart #1 that convinces me that Generations has a running theme that revolves around mentors and mentorship, teachers and teachable moments, father-figures and mother-figures, and even predecessors.  Some entries in Generation do it better than others, but every issue has at least one moment in which one character stands as an example for another.

Generations: Iron Man & Ironheart #1 is, thus far, the best of series, which is what I said about the Hawkeye Generations last week.  So I am surprised by how much Generations: Iron Man & Ironheart #1 affected me.  It is philosophical; almost spiritual in an odd way.  This is written by Brian Michael Bendis, so there is a lot of conversation between future Tony Stark-Sorcerer Supreme (who popped up in two recent issues of Bendis and Alex Maleev's Infamous Iron Man) and Riri Williams.

Many comic book people (with agendas) have blamed Marvel Comics' recent sales slump on “diversity” characters, with Riri Williams probably being the most notorious.  Generations: Iron Man & Ironheart #1 can be read as Bendis' manifesto, one that says... no declares... that Riri ain't going nowhere.  She isn't disappearing because she is the future.

Generations: Iron Man & Ironheart #1 has a large art team of seven artists and colorists, but they are what makes Bendis' story work.  The design of these pages have a funky flower child/love generation appearance that reminds me of Neal Adams' classic X-Men run, J.H. Williams, III's art for Alan Moore's Promethea, and Jon J. Muth's art for the old Marvel/Epic Comics' Moonshadow.  These different artists and art teams come together to create a 30-page story in which disparate visual styles actually become a seamless visual poem that flows like a perfectly written pop song.

Make mine Marvel.  This is what Generations: Iron Man & Ironheart #1 convinces me I should do.  We can have new versions of classic Marvel characters.  We can have both – the originals and the new ones.  Here, Tony Stark encourages Riri Williams to reach for the stars, so we can have both characters in Iron Man armor.  Yes, we can.

Posted by Leroy Douresseaux at 6:20 PM