I Reads You Review: SCOOBY-DOO, Where Are You? #87 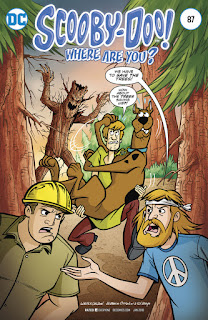 Several years ago, I had a subscription to the Scooby-Doo, Where Are You? comic book series.  I let it expire after a year, but recently renewed it.  I just received the second issue of that new subscription.

Scooby-Doo, Where Are You? #87 opens with “Woods or Wouldn't” (written by Sholly Fisch and drawn by Walter Garzon and Horacio Ottolini).  Conservationists and lumberjacks square of over the fate of a forest of redwood trees, but both sides find themselves under attack by the Wraith of the Redwoods!  Now, Mystery Incorporated has to negotiate peace between two sides and has to solve the mystery of what Shaggy calls a “freaky forest phantom.”

The second story is “The Black Katz” (written by Paul Kupperberg and drawn by Roberto Barrios and Horacio Ottolini), a story originally published in Scooby-Doo #150, a 2010 issue of the Scooby-Doo comic book series that began in 1997.  Mystery Inc. travels to Katzburg, New York, a small town overrun by a pest of pampered black cats that call Katz Manor their base of operations.  The citizens swear that these cats, which belonged to the late millionairess, Felicity Katz, have brought nothing but bad luck to Katzburg.  Sounds like a mystery to solve.

“Woods or Wouldn't” isn't a great story.  It is basically a story about working together.  I wouldn't call it a “morality tale,” but it does offer a lesson about working together, or it at least insists that people learn to comprise.  And no, a comprise between lumberjacks and conservationists would not be a case of comprising with evil.

The reprint tale, “The Black Katz,” is the better of the two stories.  First, I like the art by Roberto Barrios (pencils) and Horacio Ottolini (inks).  The composition is strong, and the layout and graphic design are strong visually potent.  This is some of the best Scooby-Doo comic book art I have ever seen; I would dare say that Barrio and Ottolini are a perfect Scooby comic book art team.

As for Paul Kupperberg's writing on “The Black Katz,” it is surprisingly strong for a mystery short story written for a children's comic book.  It feels like a full-length or single-issue story, and I think it is worthy of being adapted for a Scooby-Doo direct-to-DVD movie.  I wonder if any Scooby-Doo comic book stories have been adapted for animation.  The Scooby-Doo powers-that-be might want to think about it, considering the quality of stories like Kupperberg's tale, “The Black Katz.”

Posted by Leroy Douresseaux at 6:02 PM