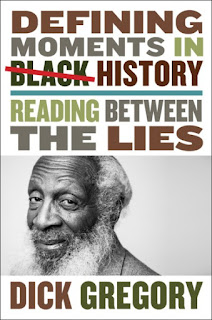 Dick Gregory was an African-American comedian, civil rights activist, and entrepreneur.  Born Richard Claxton Gregory on October 12, 1932 in St. Louis Missouri, Gregory was also a writer and social critic.  Gregory died on August 19, 2017, a month before the release of what would be his final book, Defining Moments in Black History: Reading Between the Lies.

Gregory was a pioneering stand-up comedian because of his “no-holds-barred” comic sets in which he addressed and mocked bigotry and racism.  Although he initially performed primarily before black audiences at segregated clubs, Gregory became one of the first black comedians to successfully cross over to white audiences.  He became the first black comedian to both perform on “Tonight with Jack Parr” and to sit on the couch and talk to host Jack Parr.

In Defining Moments in Black History: Reading Between the Lies, Dick Gregory uses his trademark acerbic wit, incisive humor, and infectious paranoia as the basis by which he views key events in the history of Black America.  Defining Moments in Black History is a collection of five thoughtful, provocative essays, and an insightful introduction and epilogue.  Gregory discusses everything about Black people in America, from the diaspora and slavery to civil rights and Black Lives Matter, to Black historical figures and modern Black celebrities.

I first knew Dick Gregory as a comedian, and soon came to know that he discussed everything from entrepreneurship to the diet and eating habits of Black folks.  When I discovered that Gregory was involved in the Civil Rights Movement and that he was also a social critic, I found that I had a hard time imagining him as merely a comedian.  I was always interested in what Gregory had to say, and what he had to say was always provocative and almost always insightful.  Because he was a friend of and worked with civil rights luminaries like Dr. Martin Luther King, Jr. and Medgar Evers, I saw him as a person I needed to hear.

In 1964, Gregory became involved in the search for three missing civil rights workers:  James Chaney, Andrew Goodman, and Michael Schwerner, who vanished in Philadelphia, Mississippi.  Gregory played a large role in forcing the FBI to find the three young men's bodies.  After meeting with a local sheriff, Gregory became convinced that he (Neshoba County Sheriff Lawrence A. Rainey) was complicit in the men's disappearance and with their deaths.  So obviously, Gregory wasn't just any black guy on stage telling jokes.

Defining Moments in Black History reflects that.  Gregory discusses the connection between money and slavery and the importance of Nat Turner's revolt.  He offers numerous examples of how solidarity was important to the progress of Black people in America.  To Gregory, the “Atlanta Compromise;” the founding of groups like the NAACP and the Urban League; and the actions of people like Rosa Parks, the Pullman Porters, the Little Rock Nine, and Shirley Chisholm (to name a few) brought Black people together to make change for Black people.

Gregory is also a believer in conspiracies, so readers may be uncomfortable with his ideas about “the truth” behind the death of Michael Jackson and public fall from grace of Bill Cosby and Tiger Woods.  I found the conspiracy essays a little embarrassing, but I am always willing to at least listen to a man like Gregory when he has a conspiracy he wants to discuss.  However, that should not keep readers from understanding the central arguments behind Defining Moments in Black History.  Gregory's argument is that “White supremacy” is the game being played on Black people in America.  The ones doing the playing are wealthy and powerful white people, according to Gregory, and he argues that even poor white people don't understand White Supremacy.

Gregory says that in order to fight the forces aligned against them, Black people must believe in themselves, in their beauty, in their strength, in their intelligence, and in their ability to learn and grow intellectually.  In this book, Gregory makes clear that he thinks Black people often do not think highly of themselves, accept stereotypes, and are even self-destructive or at least do things that are mostly bad for them.


Posted by Leroy Douresseaux at 7:04 PM