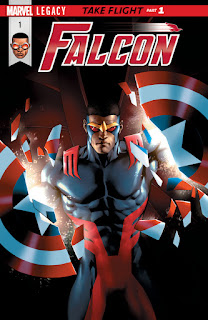 “Steve [Rogers, Captain America] being a traitor validated every cynic who felt America was an idealized metaphor for the dominant culture's survival and the minority's suffering.” - Sam Wilson-The Falcon, (p. 15 of the book; p. 13 of the story)

The new series is written by Rodney Barnes; drawn by Joshua Cassara; colored by Rachelle Rosenberg; and lettered by Joe Caramagna.  Barnes is a noted African-American television writer, having written for such diverse TV series as “Everybody Hates Chris,” “My Wife and Kids,” and the animated series, “The Boondocks.”

I hope that the above quote will, going forward, define Falcon, as the hero tries to prove that America is not a metaphor for white supremacy.  I do not believe that it is a metaphor for white supremacy, but that it is a country whose foundation is white supremacy.  This is not so much inherent as it is the result of the will of at least a third of America's white population that has racial animus towards African-Americans and, to varying degrees, other non-white populations.  Perhaps, Falcon will imagine an America that can move beyond its racism.

Falcon #1 (“Bad Kid, Mad City”) finds our titular hero headed for Chicago in hopes that he can broker a peace between the city's two largest gangs, the Southstone Rangers and the Spanish Kings.  After battling aliens, gods, and monsters, Falcon wants to address the needs of people like Sam Wilson.  Falcon has a protege to help him in his mission, Rayshaun Lucas a.k.a. the Patriot.  However, there are quite a few individuals and entities that do not want a cessation of gang hostilities, and they will do anything to not keep the peace.

I really enjoyed reading Falcon #1.  I liked its measured pace, and artist Joshua Cassara draws storytelling that offers violent action sequences and high tension, while holding firm to that measured pace of Barnes' storytelling, which is social, political, and philosophical.  As usual, Rachelle Rosenberg's coloring is pitch perfect, by turns striking and explosive and hot and dramatic.

It seems as if Barnes and Cassara are creating a superhero comic book that will be strikingly different from others.  They will give us hot superhero action, but the story will focus on a superhero who addresses the extraordinary needs of the ordinary people.  However, that hero will recognize that the ordinary needs of the people will need to be addressed by themselves and other ordinary people.  I look forward to more Falcon.

At the end of each Legacy first issue or Legacy first chapter, there is a three-page story that summarizes the history of that issue's lead character or characters.  Falcon's three-page summary is written by Robbie Thompson; drawn by Mark Bagley (pencils) and Andrew Hennessy (inks); colored by Israel Silva; and lettered by Joe Caramagna.

Posted by Leroy Douresseaux at 5:24 PM