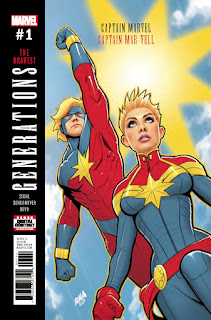 Generations is an event miniseries from Marvel Comics.  It is a planned 10-issue anthology, published weekly.  Each issue is written and drawn by a different creative team, and each issue will feature a different team-up of a classic Marvel superhero with his or her modern-day counterpart.  The series is meant to unite the legacy of classic Marvel Comics characters with the next generation of heroes as both move into the future of Marvel Comics storytelling.

Generations: Captain Marvel & Captain Mar-Vell #1 (“The Bravest”) opens with Captain Marvel suddenly finding herself somewhere she should not be.  She is in the infamous Negative Zone, specifically on the planet of Mydon, which is being invaded by winged, bug-like aliens.  Captain Marvel strikes out to protect the people of the planet and meets two of its citizens, Loba and Danae, who join her in battle.  When the odds turn against the trio, a new hero arrives, one familiar to Captain Marvel, the legendary Captain Mar-Vell, who is supposed to be dead!

Of the seven issues of Generations that I have read as of this writing, Generations: Captain Marvel & Captain Mar-Vell #1 is... well, I should try not to be too negative and not say it is the worst.  Instead, I will say that it is the least in terms of quality, specifically the art.  Artist Brent Schoonover, who is apparently a graphic designer and illustrator, offers stylish art here, but the drawing is stiff.  The character and figure drawing is a bit awkward, and the people of Mydon look like cheaply produced action figures.  The proportions are off in most panels.  Everything looks funky and more like the art one might find in a small press take on superheroes.

Writer Margaret Stohl offers a story that is little more than what one gets in throwaway comic book annuals.  There is, however, a nice push-pull and ebb and flow because the Captain Mar-Vell here is such an early version that he predates the arrival of his apprentice, the former Ms. Marvel, Carol Danvers.  The fact that he tries to act as a mentor who tempers Captain Marvel's hotter blood provides some nice humorous moments.  Still, what is the point of Generations: Captain Marvel & Captain Mar-Vell #1?  It seems like a mere element in a cynical ploy to re-launch Marvel Comics' latest... rebirth.


Posted by Leroy Douresseaux at 5:08 PM