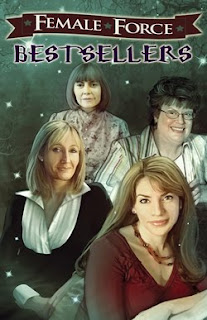 “A lot of our biography comic books have sold out, despite many shops still under-ordering. Readers have contacted us still trying to find our books,” said publisher Darren G. Davis. “It just goes to show that you don't have to be mainstream to reach the market. Readers just want great stories with great art, and if you can deliver that to them, they'll come back for more every month.”

We have heard from Ms. Rice who said that she “appreciates Bluewater's graphic novel of her life”.

As for a new printing, there is nothing planned for the “Political Power: Arnold Schwarzenegger” but as for the Anne Rice biography it will be available next month in the graphic novel “Female Force” Best Sellers”. The collected life stories of JK Rowling, Stephenie Meyer, Anne Rice, and Charlaine Harris in this broad examination of strong women that have made a difference in today's literature.

Readers can advance order “Female Force: Best Sellers” at Amazon.com http://amzn.to/cDFb3L or by calling their local comic book shop. To find a comic book store near you go to ComicShopLocator.com.

"Each of our biography comics takes a different approach in bringing stories to life," said Darren G. Davis, president and founder of Bluewater Productions. "If you compare the Lady Gaga comic with the one on “Twilight” star Robert Pattinson or even with the Oprah bio, you'll appreciate that these books are being crafted with a great deal of creativity, research and vision…they are not cookie cutter productions.”

In the last month, “Fame: Lady Gaga”, “Fame: Kirsten Stewart” and “Fame: Taylor Swift” have sold out in record time. Upcoming titles for the biography series are comic book biographies of Taylor Lautner, Justin Bieber, Bill O'Reilly, Meredith Vieira, David Beckham and Betty White. All of them are available for pre-order.

The comic book series has drawn considerable media attention, including features on CNN, MSNBC, Fox News, “The View” and “Live with Regis and Kelly.” It has also been featured in such periodicals as People Magazine, OK! Magazine, New York Times, Chicago Tribune, USA Today and thousands of blogs and other media outlets.

Posted by Leroy Douresseaux at 9:28 AM