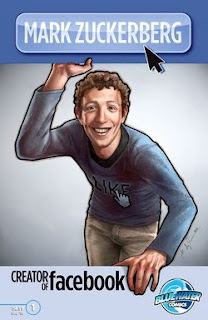 “MARK ZUCKERBERG: CREATOR OF FACEBOOK” A DIFFERENT KIND OF COMIC BOOK BIOGRAPHY FROM BLUEWATER
In December, Bluewater Productions is publishing a biographical comic book called "Mark Zuckerberg: Creator of Facebook", a 48 page giant sized issue priced at $6.99. Written by Jerome Maida and penciled by Sal Field, with cover art by Michal Szyksznian, it will be available from comic book stores and online retailers.
Who is the real Mark Zuckerberg? The answer, of course, is somewhere in between and Bluewater Productions is announcing it is filling that gap and exploring the background of the website's founder in the medium of comic books.

The young billionaire and creator and CEO of Facebook who announced recently that he is generously donating $100 million to public schools in Newark? Or the cold-blooded businessman who walks over people to get what he wants - the way he is portrayed in the critically acclaimed movie "The Social Network".

"This is a fascinating story" says Maida. "I enjoyed researching it because it's extremely compelling. Think about it. Mark Zuckerberg is the youngest billionaire on the planet and created something that has already had a profound impact on the world. Yet hardly anyone knows much about him. It's amazing."

The road to success, Maida says, was not preordained nor was it always a smooth ride.

"Mark was offered loads of money at a young age and turned all his suitors down because deep down he knew he had higher goals than to work for someone else", says Maida. "Bill Gates offered Mark a million dollars while Mark was still in high school to work for him and Mark turned it down. I mean, how many high school kids will ever be made an offer like that? Very few. And how many would have the confidence to turn it down and pursue their own path? Very few, if any. But that's what Mark did."

Of course, Mark wasn't able to do everything on his own. He received help to various degrees and in different capacities from others. Many of these business relationships did not end well.

"Rightly or wrongly, Mark dealt harshly with some people on his way to where he is today", says Maida. " As we see, he left many people feeling betrayed. I try my best to be fair here. No one is totally innocent in this story. I try to represent each of the major players' point of view."

“Bluewater is looking to tell unique stories that are just not about celebrities”. Said publisher Darren G. Davis “The 1st biography one shot we are doing is about Father Yod and The Source Family and Mark Zukerberg will follow the next month. These books are not only good reading to get to know the subjects but are also being used as a tool in schools and libraries. ”

"Mark Zuckerberg: Creator of Facebook" will hit shelves in December but will be available to order at bookstores, comic stores or online at www.tfaw.com.

Posted by Leroy Douresseaux at 6:57 PM