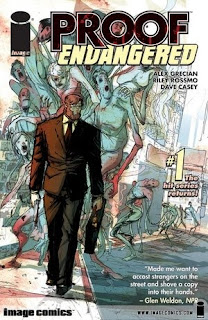 "With PROOF, we established a book and a world," says Grecian. "With ENDANGERED, we're going to start dismantling that world and ruining Proof's life."

PROOF: ENDANGERED: A mysterious organization threatens The Lodge, a secret government facility whose agents hunt and protect mythological animals. Former agent and sasquatch John "Proof" Prufrock is on the run, hunted by the government he once worked for. He has information that, after 200 years, may finally tell him who he is and where he came from, but he has to turn for help to a teenager who claims to own Proof's body! This is where the series begins all over again!

Posted by Leroy Douresseaux at 8:16 AM