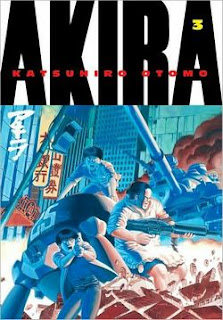 Kodansha Comics (through Del Rey Manga, apparently) recently released the third volume in their current English-language republication of Katsuhiro Otomo’s legendary manga, Akira. Just as the first two volumes did, Vol. 3 had me racing through nearly 300 pages of comics as if my life depended on it.

Originally published in the Japanese manga periodical, Young Magazine (from December 1982 to June 1990), Akira takes place in the year 2030 A.D. and is set Neo-Tokyo, the new city built upon the ashes of Tokyo. 38 years earlier, Tokyo was destroyed by a monstrous psychokinetic power known as Akira in a nuclear-like blast that also started World War III. Tetsuo Shima, a juvenile delinquent, begins to exhibit paranormal abilities, which brings him to the attention of The Colonel, the head of a covert government program that studies children with telekinetic powers. Tetsuo’s kidnapping thrusts his friend Shotaro Kaneda into this conspiracy.

As Akira, Vol. 3 opens, Akira, who actually a boy, is awake and is now the pawn in a deadly game of take-away. Kaneda, Rei the young resistance member and her associate, Chiyoko, rescue the boy from the clutches of Tetsuo, who awakened Akira in hopes of challenging his powers. Soon, however, other competing forces attain, lose, and regain the boy in a chase that culminates in a quite neighborhood, where a small war breaks out.

On the back cover of this third volume of Akira, there is a quote from comic book writer Warren Ellis (Red) that says, “Utterly unlike anything you’ve experience before.” A short sentence that speaks volumes of truth, that’s what it is. Praise Ellis! Testify!

There have been science fiction comic books with majestic art (like the works of French cartoonist/illustrator Moebius). There have been dystopian comics that are both great reads, highly acclaimed, and hugely influential (like American Flagg!, Batman: The Dark Knight Returns, and Watchmen). They live in Akira’s shadow. The entirety of Vol. 3 is fantastic, but the last 60 pages have a visual power unparalleled in comic books. I think we would have to reference motion pictures in order to quantify Akira’s visual power. Right now, I’m thinking that this is the greatest comic book ever.

Posted by Leroy Douresseaux at 11:28 AM