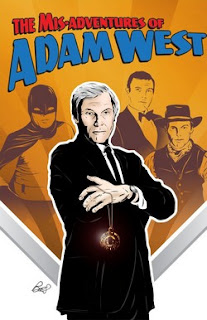 This springs comes a new ongoing comedy action adventure series with the iconic Adam West in the self-title “Misadventures of Adam West”.

Bluewater describes the series as, The Man, The Myth, The Amulet? Legendary star of the small and silver screen, ADAM WEST, has his career youth-enized in this hip-whimsical, trans-dimensional epic of an adventure. When a mysterious fan delivers an exotic amulet to Mr. West's doorstep he is Dorothy-fied on an odyssey that will change his career, his love life and inadvertently make him the man that saves the universe!

"I am really impressed with Bluewater's creative team and vision. They have morphed me and it didn't even hurt. Bluewater has taken me full circle from playing a famous comic book character to being one. Fascinating! I'm in my own comic book and I love what goes on there. Wait "til you get a load of the wild and unique situations they've put me in and how they mix it with reality. What a jolt it is to see some of my fantasies come to life right in front of us." Adam West

The book will be co-written by Adam West, Walter Fernandez Jr. & Arastao Maree and drawn by Lipe artist on “William Shatner Presents: TekWar”. The covers were done by Matt Bellisle.

“Adam West is an worldwide icon and we are honored to be working one-on-one with him on these book” said Darren G. Davis “We are not only creating this as a comic book but as a brand. We have interest already in the television world as well as an action figure coming out from Go Hero and Zica Toys.

For more information, visit http://www.bluewaterprod.com/.
Posted by Leroy Douresseaux at 11:15 AM