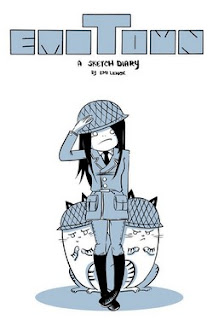 Emi Lenox has taken diary comics to a whole new level with EMITOWN, a breathtaking series of vignettes that document the travails of daily life, from the mundane to the miraculous. Image Comics is proud to present the first EMITOWN

collection, which will be available this October.

"EMITOWN was my challenge to draw everyday and also my way to record all the little moments that made me laugh, cry, or downright frustrated," says Portland, Oregon-based Lenox. "I never thought it would one day be a book, and I am so excited to work with Image to make it happen! EMITOWN feels right with Image."

"One of the things we pride ourselves on here at Image is seeking out new voices and giving them a chance to shine," adds Image Comics Publisher Eric Stephenson. "Writer Jamie S. Rich turned me on to Emi's work earlier this year, and I'm really pleased that we're able to expose her work to a wider audience. This is just the beginning for an extremely talented young cartoonist!"

In EMITOWN, Lenox brings you into her world with superb cartooning, a brilliant cast of characters, and an innocent perspective often left on the cutting room floor of other diary comics. With a broad range of styles, every day is an adventure, from a morning breakfast burrito to metaphoric tales of superheroes and battlefields of love. Emi proves that life is never dull in her first annual collection of EMITOWN!

Some early praise for EMITOWN:

"EMITOWN is one of my favorite places to visit...I simply love the fresh energized pop that comes from Emi's work" - Mike Allred (Madman, IZombie)

"EMITOWN is the rare and charming comic that doesn't resort to nudity and misanthropy for its entertainment. It's just adorable" - David Hahn (Murderland, Bite Club, Fables)

"Emi can draw like nobody's business. Her style is fabulous!" - Jamie S. Rich (You Have Killed Me, Spell Checkers)

"Emi Lenox misrepresented herself to me as someone who doesn't draw, when in fact she does. Really well, too. Good narcissism!" - Jeff Parker (Underground, Agents of Atlas, X-Men: First Class)