The Walking Dead #1 Coming Back as an "Image Firsts" 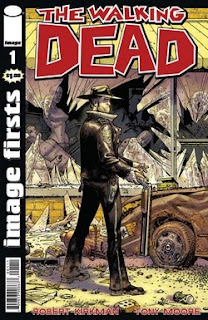 The Image Firsts program has been an unparalleled success, introducing comics fans to classic Image titles for only $1.00. IMAGE FIRSTS: THE WALKING DEAD was a sellout at the distribution level, despite an extremely large overprint, and Image Comics is delighted to announce that the book is going back to press!

With Image Firsts, Image Comics is re-presenting first issues as an introduction to our most acclaimed titles, with each acting as the perfect primer to their ongoing series and collected editions! IMAGE FIRSTS: THE WALKING DEAD reprints the first issue of the hit series written by Robert Kirkman, and the second printing will feature cast photos from the AMC television series, which premiers October 31, 2010.

IMAGE FIRSTS: THE WALKING DEAD Second Printing (FEB100327), a 40-page black-and-white book reprinting the first issue of the ground-breaking series, plus a 12-page bonus section featuring full-color images from the AMC television series, will be in stores October 6, 2010, for $1.00.

Posted by Leroy Douresseaux at 9:14 AM