Elephantmen Volume 1 Gets a New Edition 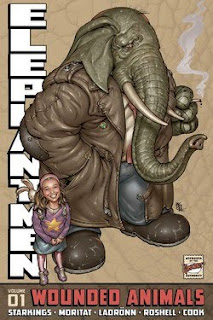 THE ELEPHANT IS BACK IN THE ROOM!

Currently out of print, the new printing of the ELEPHANTMEN VOL. 1

trade paperback has been expanded and revised to include the series' sold out zero issue, painted by LADRÖNN, as well as an all-new sketchbook section by Moritat and the ENGLISH & MEDIA STUDIES back matter from the single issues!

ELEPHANTMEN creator, Richard Starkings is overjoyed: "Revisiting our first seven issues -- EIGHT when you count the origin issue illustrated by Ladrönn -- made me proud. We've come so far, but so much of what we set out to do four years ago is perfectly encapsulated in this first volume. In addition to the new trade dress, which now matches the sleek and sexy graphics of volumes 2 and 3, we've added over 80 pages of back matter from the original, increasingly hard-to-find back issues, and my fellow countryman, BBC radio and TV personality and TURF co-creator Jonathan Ross has kindly provided a whole new introduction for us, so just about everything in this first collection feels new again."

"There really isn't another book like ELEPHANTMEN on the market, and that's something I'm exceptionally proud of," added Image Comics Publisher Eric Stephenson. "Richard has assembled a crack team of creative talent to produce one of the most unique comic book reading experiences available, and this collection is the perfect introduction to this rich and endlessly fascinating world."


Image Comics is a comic book and graphic novel publisher founded in 1992 by a collective of best-selling artists. Image has since gone on to become one of the largest comics publishers in the United States. Image currently has five partners: Robert Kirkman, Erik Larsen, Todd McFarlane, Marc Silvestri and Jim Valentino. It consists of five major houses: Todd McFarlane Productions, Top Cow Productions, Shadowline, Skybound and Image Central. Image publishes comics and graphic novels in nearly every genre, sub-genre, and style imaginable. It offers science fiction, romance, horror, crime fiction, historical fiction, humor and more by the finest artists and writers working in the medium today. For more information, visit http://www.imagecomics.com/.
Posted by Leroy Douresseaux at 11:59 AM