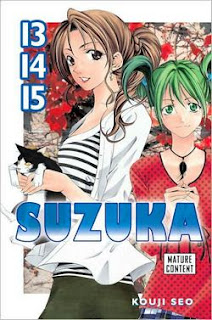 Suzuka is a manga series from creator Kouji Seo. The series is a high school romance that uses a high school track and field team as a prominent backdrop.

The sports-themed series focuses on Yamato Akitsuki, a teen boy who moves from rural Hiroshima to the big city of Tokyo to change himself. He moves into a dormitory run by his aunt while he attends high school. Yamato falls in love with his next door neighbor, Suzuka Asahine, a talented and much sought-after high jumper.

Suzuka Volume 13•14•15 is an omnibus edition that collects Vols. 13 to 15 of the series. In this collection Yamato’s girl troubles go into overdrive. First, Suzuka is leaving for America to further develop her high jumping skills, but before she leaves, Suzuka has something shocking to tell Yamato. Then, Hanoka Sakurai, Yamato’s former girlfriend and a model, decides to make a move on Yamato in Suzuka’s absence. Finally, Saki Asagi, a childhood pal from Hiroshima moves to Tokyo in order to attend college. Saki is the “firefly confession girl” who broke Yamato’s heart. Has she come to break his heart again?

Like Junpei Manaka, the lead character in Mizuki Kawashita’s Strawberry 100%, Yamato Akitsuki of Suzuka has girl trouble. Both start off liking one girl, but over the course of each series, both end up with multiple girlfriends, female friends, love interests, and girls pursuing them. While both series are character driven, Suzuka is a drama with comic moments (while Strawberry 100% is a comic romp). Suzuka is similar to those television teen dramas that often show up on American television, especially The CW television network and the ABC Family cable television network.

Like these TV series, Suzuka finds its teen characters not only dealing with issues of dating and romance, but also issues relating to family, plans after high school, and personal achievement. The art for this series is rather matter-of-fact. Kouji Seo can obviously draw and design the kind of pretty, curvy, young females that dominant romance-theme manga. However, the focus is really on character drama, so the art is free of stylistic flourishes that might take away from the story.

Although this manga is quite well done, it really is not something I would normally read. It is sad that a grown man must admit this, but I prefer light-hearted shojo manga like the titles published by VIZ Media under its “Shojo Beat” imprint and Del Rey’s shojo titles that are comedy and/or fantasy.

is good, especially in this larger-than-usual edition.

Posted by Leroy Douresseaux at 12:42 PM