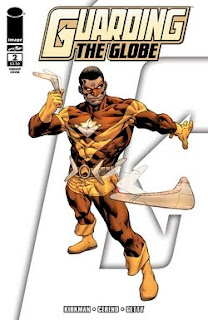 NOW FOR A SOMETHING A LITTLE DIFFERENT

Image Comics is thrilled to announce and reveal the variant cover for the second issue of the hit miniseries GUARDING THE GLOBE!

The variant cover for GUARDING THE GLOBE #2 features the teaser image of Kaboomerang, one of the new members of the Guardians of the Globe team. It is available for order alongside the original cover using Diamond code JUL108196.

GUARDIANS OF THE GLOBE is a six-issue miniseries cowritten by Robert Kirkman (THE WALKING DEAD) and Benito Cereno (INVINCIBLE PRESENTS: ATOM EVE & REX SPLODE) and drawn by newcomer Ransom Getty. As the VILTRUMITE WAR rages on within the pages of INVINCIBLE, the ranks of the Guardians of the Globe are suddenly depleted. In GUARDIANS OF THE GLOBE #2, the Guardians recruitment drive is interrupted as a distress call comes in from Aquarus: Octoboss has taken over Atlantis! Now the recruits are thrown head first into battle -- let's hope they're ready. If only Invincible were there to help...


Image Comics is a comic book and graphic novel publisher founded in 1992 by a collective of best-selling artists. Image has since gone on to become one of the largest comics publishers in the United States. Image currently has five partners: Robert Kirkman, Erik Larsen, Todd McFarlane, Marc Silvestri and Jim Valentino. It consists of five major houses: Todd McFarlane Productions, Top Cow Productions, Shadowline, Skybound and Image Central. Image publishes comics and graphic novels in nearly every genre, sub-genre, and style imaginable. It offers science fiction, romance, horror, crime fiction, historical fiction, humor and more by the finest artists and writers working in the medium today. For more information, visit www.imagecomics.com.
Posted by Leroy Douresseaux at 9:24 AM