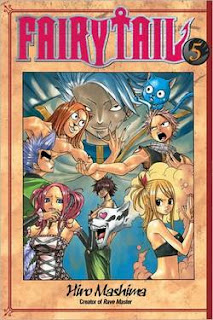 Lucy Heartfilia is a girl wizard, and her dream was to become a member of Fairy Tail, the famous wizards’ guild. Lucy met Fairy Tail member, the young fire wizard, Natsu Dragneel, and Happy, his talking, occasionally winged cat. Before long, Lucy was in Fairy Tail, wearing the guild’s brand on her right hand, and even meeting other powerful members like Gray Fullbuster and Erza Scarlet.

As Fairy Tail, Vol. 5 opens, Lucy and friends prepare to protect a village from the impending attack by former members of the guild, Lamia Scale. During the attack, the injured Gray Fullbuster realizes that a former associate of his, Reitei Lyon, is involved with Lamia Scale, and Natsu has gone to battle Lyon. Now, the secrets of Gray’s past are about to be revealed.

Although it is published by Del Rey Manga in North American, Fairy Tail reminds me of VIZ Media Shonen Jump titles like One Piece and especially Naruto. Fairy Tail has a large cast of characters and their pasts often initiate or shape storylines (a prominent trait of Naruto). Creator Hiro Mashima (Rave Master) offers a manga that should be as popular with young male readers as the most successful Shonen Jump titles. Plus, the art is stellar. Sometimes, Fairy Tail looks like a superheroes with magic powers comic book, and I wish many of the Doctor Strange and Dr. Fate comic books were half as exciting to read as Fairy Tail.

Posted by Leroy Douresseaux at 8:26 PM