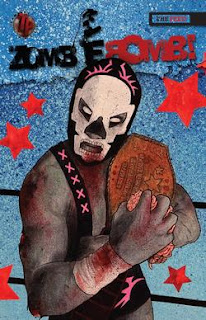 Terminal Press’ breakout hit series “ZombieBomb!” is back with its second killer issue, “ZombieBomb! The Feed.”

Rich Woodall (Johnny Raygun) and acclaimed painter Adam Miller return as co-editors on the zombie anthology book that’s been stirring up buzz between horror and comics enthusiasts alike since the title launched in March. With accolades from industry greats such as Ed McGuinness and Eric Powell, and a four-skull stamp of approval from Fangoria magazine, “ZombieBomb!” has proven to be fertile ground for the top talent that’s assembled to spin short tales of the undead in every 64-page issue.

“ZombieBomb! The Feed” also continues Terminal Press' collaboration with thrash metal legends Exodus. "Last Desires" is a featured story from writer/frontman Rob Dukes, who also penned the serial killer nightmare I AM BECOME GOD earlier this year and is a character in his band's own comic, Exodus: Death Begets Death.

“ZombieBomb! The Feed” premiered at SDCC 2010, and can now be previewed and purchased at the Terminal Press website. Faithful ZombieBombers! can get their undead fix between issues at the official Facebook page and Youtube channel, ZombieBombTV.

Check out all the undead goodness at TP's zombie page.
Posted by Leroy Douresseaux at 11:02 AM