CBLDF's "Liberty Annual 2010" Due in October 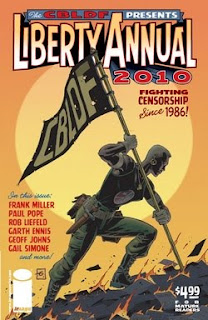 “I’m truly humbled by how much time and energy our line-up of talented contributors put aside to support the Comic Book Legal Defense Fund in contributing to LIBERTY ANNUAL 2010,” says CBLDF President and LIBERTY ANNUAL editor Larry Marder. “We changed the name of the book to reflect that once a year the greatest creators in the field bring their A-game to a project that helps the Fund reach new readers and raise much needed funds. No one got paid, but everyone stepped up to the plate and swung for the fences. The result is a highly collectible comic book that's a great read for an important cause."

CBLDF’s LIBERTY ANNUAL 2010 features an all-star line up, not least of whom are providing beautiful covers for the book. DAVE GIBBONS (Watchmen) has contributed an all-new Martha Washington cover, and DARICK ROBERTSON (The Boys) has provided a Conan cover. To increase the book's visibility, the incentive cover now boasts all-new artwork from CHARLIE ADLARD, the artist behind THE WALKING DEAD, which will soon be a hit series on AMC!

The best in the industry contributed to CBLDF’s LIBERTY ANNUAL 2010, which includes a new The Boys story by GARTH ENNIS & ROB STEEN, the first new Megaton Man adventure by DON SIMPSON in over a decade, an all-new Milk & Cheese story by EVAN DORKIN, a new Conan tale by DARICK ROBERTSON, Boilerplate by ANINA BENNETT & PAUL GUINAN, and "The First Amendment: It’s Why We Fight!" by LIBERTY COMICS editor LARRY MARDER.

The CBLDF is a non-profit organization dedicated to the protection of the First Amendment rights of the comics art form and its community of retailers, creators, publishers, librarians and readers. The CBLDF provides legal referrals, representation, advice, assistance and education in furtherance of these goals. For more information on the Fund, visit www.cbldf.org