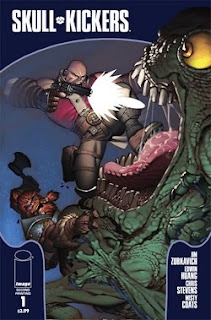 SKULLKICKERS #1 sold out at distribution level, rush second printing on its way

SKULLKICKERS is kicking down doors all over the place, with great early reviews and advance buzz. Image Comics is proud to announce that despite a significant overprint, SKULLKICKERS #1 has already sold out at the distribution level in advance of its September 22 street date! The second printing of this phenomenal issue will be in stores October 13.

“Everyone on the team was ecstatic about the momentum building for the book,” says Zubkavich. “Even still, when our rep told me the generous print run had sold through before our release date, I was stunned. I can’t wait until people have a chance to give issue one a read and jump on board the wild ride we have planned for the series. Image is on a roll, and we’re proud to be a part of it.”

In SKULLKICKERS, two mercenaries are entangled in a high-class assassination plot, and nothing -- not werewolves, skeletons or black magic -- will stop them from getting paid. If you love fantasy, action-comedy, a touch of black-hearted violence and movies like ARMY OF DARKNESS, SKULLKICKERS is the book for you!


Image Comics is a comic book and graphic novel publisher founded in 1992 by a collective of best-selling artists. Image has since gone on to become one of the largest comics publishers in the United States. Image currently has five partners: Robert Kirkman, Erik Larsen, Todd McFarlane, Marc Silvestri and Jim Valentino. It consists of five major houses: Todd McFarlane Productions, Top Cow Productions, Shadowline, Skybound and Image Central. Image publishes comics and graphic novels in nearly every genre, sub-genre, and style imaginable. It offers science fiction, romance, horror, crime fiction, historical fiction, humor and more by the finest artists and writers working in the medium today. For more information, visit http://www.imagecomics.com/.
Posted by Leroy Douresseaux at 8:39 AM