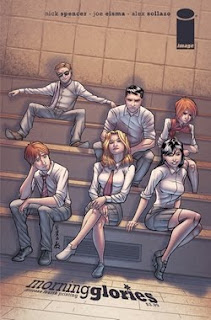 MORNING GLORIES #1 sells out for third time, fourth printing on the way

MORNING GLORIES #1 has done it a third time, with another distribution level sellout, and to meet continued demand, it's going back to press for a fourth and final printing! This new printing will feature an all-new cover by interior artist Joe Eisma.

MORNING GLORIES is written by Nick Spencer, the burgeoning creative mastermind behind FORGETLESS, EXISTENCE 2.0 and 3.0, and SHUDDERTOWN. Eisma pencils and inks the series, and Rodin Esquejo provides the gorgeous covers.

Shadowline Publisher and Image partner Jim Valentino exclaims, "We are completely blown away and eternally grateful to the fans and retailers who have made this the biggest hit in Shadowline history!"