I Reads You Review: MATA HARI #0 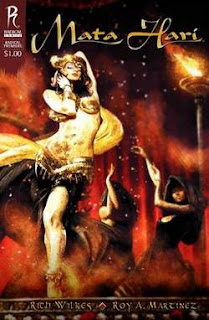 The story opens in Litmov, Russia in 1953. The narrator is Antonia Maslov, a young Russian girl who recounts the exploits of her uncle, Lt. Vadim Maslov. Vadim was a photographer who worked with the French during World War I. Vadim is destined to be part of a love triangle with French General Robert Nivelle and the notorious Mata Hari.

Reputedly a German double agent, Mata Hari would be blamed for the deaths of 50,000 French soldiers and was executed after a sensational trial shocked Europe. The question is was she really a betrayer of countless lovers or merely a scapegoat.

After reading Mata Hari #0, I’m curious about the rest of the story, but I wish the title character would have made an actual, first person appearance in this preview. Truthfully, writer Rich Wilkes’ article at the end of this issue, “Mata Hari: A Proposition,” is a more interesting read than the comic book portion, although the comic book portion does intrigue.

Posted by Leroy Douresseaux at 7:41 PM